Editor's Note: Vistors may be interested to know that we have recently uploaded Kitty's census of copies of La Prose. Check it out here.


In the early days of pochoir (1910s to 1930s), color was added by stencil to an image after it was printed by the collotype process. This process preceded offset printing; the image was either a keyline or could be a continuous shaded image. Pochoir was the first choice for the Parisian fashion magazines at the time because of the large numbers of colors that could be applied efficiently. The atelier where Nathalie and Christine worked in the late 70s, Daniel Jacomet, was established early in this period. Occasionally there was no printed image before the pochoir was applied, as in Blaise Cendrars’ 1919 book La Fin du Monde. There were 1225 copies of this book printed. A substantial number of Léger textual images were added by pochoir, an enormous task for the pocheurs at Atelier Richard in Paris.

The pochoir images in La Prose du Transsibérien are based on Sonia Delaunay’s oil painting and her gouache maquette. Only the text and the Michelin map are printed by letterpress. The paper for the majority of the planned 150 copies is called "simili Japon," which appears to be a commercial French laid paper. Twenty-six copies were printed on Japon, one of many types of Japanese paper sold by the Japan Paper Company. The simili Japon is neither cream nor white, but rather a darkish white/cream (it may have darkened over time), whereas the Japon is somewhat whiter.

The printing of the text on the Japon copies is beautiful and sharp, whereas on the simili Japon it is somewhat grainy and overinked. This shows how the choice of paper affects not only the end result for the printing, but also for the pochoir.

Atelier Coloris is often commissioned by museums to make reproductions of artworks to sell in museum stores, and they nearly always use Rives BFK papers. This is too thick for my purposes because of the folding scheme. I sent samples of letterpress-friendly papers for Atelier Coloris to test: Bugra, Zerkall Book, Zerkall Laid, Biblio, Frankfurt Crème, Frankfurt White, Arturo, Rives Heavyweight. Christine Menguy responded that her preferred papers for pochoir were: Biblio, Bugra and Rives HW. The problems she encountered were: poor color absorption with Zerkall, Frankfurt makes stripes (shows the brush strokes) though it softens well, and Arturo makes stripes.

While I was waiting for her results, I made a facsimile edition for the Zamorano Club on Frankfurt Crème, which I talked about in the last blog entry. The issues my assistant Chris Yuengling-Niles encountered were these: the color slipped under the stencil more often than desired, possibly because of the sizing, and the brush strokes showed on dark colors like blue and showed even on the light blue. So the absorption of the gouache into the paper is a critical factor to consider.

I chose three papers to test for my next full-page facsimiles, four sheets for each type of paper for an edition of twelve. The papers tested were: Zerkall Crème, Biblio, and Rives HW.


The Zerkall paper had the same difficulties as the Frankfurt Crème with seepage under the stencil and the brush strokes, and the Biblio paper tended to pill up if you swirled with the brush too long. So Rives HW was chosen, even though it is not a laid paper like the original, nor is it the same color as the original, which proved impossible to match. But it looks more like the Japon paper, which is a soft white color and has a smooth surface. I had tested a number of possible Japanese papers at Hiromi’s in LA, but the fibers pulled up rather quickly when the brush swirled, so I rejected using Japanese paper. Those pocheurs in 1913 must have had a very light touch while making the copies on Japon, since I only saw one or two areas on the Legion of Honor copy on Japon which had this same problem. I did not notice this on the Bibliothèque Nationale copy or the one at the Jacques Doucet Library in Paris, both on Japon, but at that time I wasn’t looking for it.

I had originally chosen Rives HW in 2015 to take to France for the first facsimiles, but Nathalie preferred a paper she had in-house. I had made a sample binding with that paper in 2015 so I could see the issues in gluing and folding the book. The Rives paper measures 11 mil, while the simili Japon is 10 mil and the Japon is 7.5 mil, so it seemed like the Rives HW was an appropriate thickness for the project. It also folded well against the grain when making the first fold along the over six-foot length of the book.

Once the Rives HW paper was selected, I took the new sample to LACMA to compare it with the original. A few of the areas had a slightly different brush stroke, like the light blue at the bottom, but the basic stencils were all the same shape.

Some of the colors were still slightly different from the original, and so my master list of colors was adjusted again. I am depending on a combination of Pantone colors and gouache samples to pin down the exact colors, but it’s difficult when there’s a finite number of Pantone colors. It would be so exciting and helpful to see all three originals right next to each other. Here's the updated list of colors for three originals: 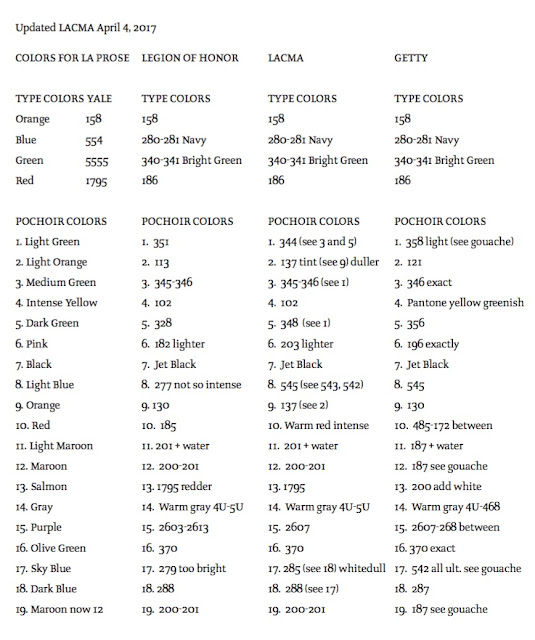 My next task is to make a new facsimile of the first page with adjusted colors to match the LACMA copy and take it there for a final check. When I am in France, I will not have a copy nearby to check the colors, so this has to be done now. I have to make new tracings of pages two, three and four and identify the colors, trusting that many are the same as the first page. Then I will cut as many stencils as possible, make facsimiles and check the colors again before I go off to France.

Meanwhile, the digital scans we licensed from the Palace of the Legion of Honor are being worked on by Richard Siebert in San Francisco. The background has to be removed so that the type is as sharp as possible. Sometimes the pochoir covers the type, and often the fold of the paper mars the type, so that probably each letter of the 447 lines has to be fixed. Then the type has to be separated into the sixteen print runs for the four colors on each page and photopolymer plates made. Richard will print the book on his beautiful Heidelburg press that will take sheets of 15.5 x 23 inches, exactly big enough for my project.