Maquettes for all four pages


An edition of sixteen copies of the pochoir on the first page was made for the eleven underwriters for this project. One copy was sent to each of them just before I left for France on June 25. This edition was a chance to finalize the colors for the entire edition and to work out some pesky issues with the half-moon shapes at the top and side of the page. I decided to cut an entire new set of stencils after I adjusted some of the shapes. These eighteen new stencils worked like a dream on the Rives heavyweight paper chosen for the project, though if you swirl your brush too much the paper will abrade, and you still have to watch for seepage under the stencil shape if your brush is too wet, or if the direction of the gesture is wrong for the shape.

I went to the Legion of Honor with Richard Siebert, who would be printing the book, to check yet again the colors for the type and for the pochoir. Note that the Legion copy is on Japon, and the colors are somewhat softer than those on simili Japon.


Just before I went to France I visited the Getty with my assistant Chris Yuengling- Niles to see their original copy again on simili Japon for another color check. Finally nearly all of the colors for the three copies I have been working with extensively (Getty, LACMA, Legion of Honor) match according to my numbering system. The newest list follows. 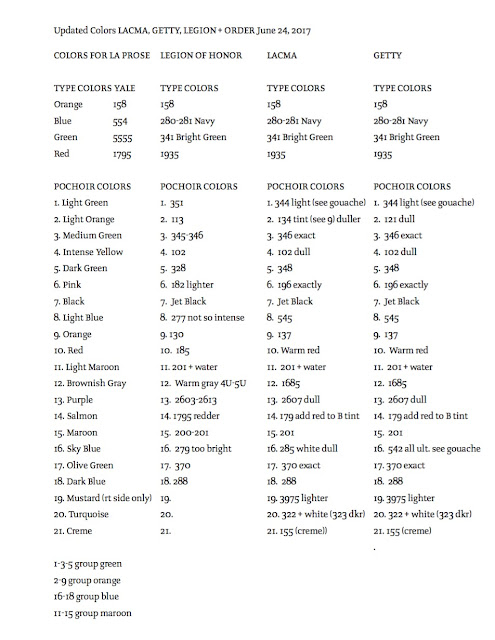 The pochoir for La Prose might have been done at Imprimerie Crété, where they employed at least six pocheurs. Normally each pocheur would have one color to work on for the whole edition, possibly all in one day if the edition were small. In that way she could make all the pages in the edition the same color. Small differences in color within an edition could be due to having to mix more color if you run out, or having more color in the pochoir brush than planned, or less. If you have to stop at the end of the day and return to the editioning the next day, getting the color exactly the same intensity again takes skill. The humidity and temperature in the room can affect the application of the color as well.

The next task I had was to make an edition of five copies of all the left side pages, which meant  first making a master tracing of each page.


After comparing all of the colors on pages 2, 3 and 4 to the colors on the first page, I made a master list of colors for the whole book. There are 21 base colors in total, plus 20 tints of the base colors, just for the left side.

For each page, you have make tracings for each color and cut the stencils so you can start the pochoir.

Instead of working on one page at a time, I decided to work on all four pages in series, so that I could mix one color, use one brush, and just change pages.


I hoped that the order of laying down the colors would be nearly the same for each page. Normally you work from light to dark, but I had to examine closely the Yale facsimile (and the original copies) to see which color was on top when there were several layered colors.


The fourth page order was remarkably different after the third color, so it was a little crazy-making to do the edition this way. To facilitate this effort, my assistant Chris placed each stencil on its tracing master and prepared each color as I worked through the series.

Once I completed all the colors and tints on all the pages (14), I was finally able to place them in vertical order and see how they looked all together. (15)

They were completed the night before I was to drive to San Francisco to pick up the printed pages from Richard Siebert, which was two days before I left for France. I had hoped to have the printed pages in hand at least a week before I left, so that I could do the same process for all the right side pages. I wanted to cut all the stencils and make maquettes for the right side, but I couldn’t do that until the printed pages were done. So I had to do that task once I arrived at Atelier Coloris in France.
Posted by Kitty Maryatt at 4:37 PM 10 comments: